Since this year we're actually allowing students to use their electronic devices in class, I've been trying to come up with ways I could actually incorporate them to keep the students interested but still be content related.  One thing I've been playing around with this year is using Twitter.  I've looked at it in a variety of different ways, and here are some of the things I found out.

Twister: Fake Tweets
ClassTools.net, along with a variety of games FakeBook, offers Fake Tweets.  Students can write fake tweets using the template they provide, which can then be printed and posted around your classroom.  I haven't actually used this with my students, but I like that it offers an easy to use template and students don't have to sign up for an account.  There are sample fake tweets there that show how it's incorporated into History classes.  While these particular examples would be grade for a cultural connection or a literature unit, I actually prefer to have the students post as themselves.

Twitter - For the students
Our school system actually unblocked a lot of websites for this year, including Twitter.  I could actually use Twitter with my students in the classroom.  It is free and doesn't actually require that much personal information to sign up.  I think the students would love the idea of using Twitter in class, but it seems like it would be complicated and a little too personal if students are using their real accounts.  Personally, I don't think I'm at a point where I want to have students tweeting with their own accounts.

I could see this as a useful means for me to communicate with students outside of class though - if I used a Twitter account to post about upcoming assignments or German club events, then it seems like it would be a great tool.  This is the only way I'd consider using the real Twitter in the classroom.

Twitter - For you
I attended a professional development workshop earlier this week that talked about using Twitter as a tool for you as an educator.  The presenter said that it could be a great way to connect with a.) other educators in our field, whether we meet them in person, see them in conferences, or find them online and b.) target language sources such as the embassy, native speakers, and newspapers.

I did in fact sign up for a Twitter account at this session and looked through to find some relevant online sources.  These are the main ones that are German-related: DW Deutsche Welle, Noah Geisel (2013 ACTFL National Language Teacher of the Year), ACTFL, Goethe-Institut, and the German Embassy.  You're welcome to check out my twitter page, but I warn you that most of who I'm following isn't even work-related, nor do I ever plan on actually "tweeting" anything.

Twitter Templates
Since I didn't want to go through the mess of actually figuring out getting students signed up with Twitter, I decided the easiest thing for me to do would be to get them to write out their Tweets.  I would pose the class a question, they would answer using 140 characters (or less) and at least one hashtag.

This is open-ended enough that I can use it in all levels of German, though obviously the type of question would change.  For German 1, for example, I might ask something as simple as "Was spielst du gern?" (What do you like to play?), whereas for German 4 I could ask something like "Ist man einfach schön geboren, oder kann man sich schön machen?" (Are you born beautiful or can you make yourself beautiful?). 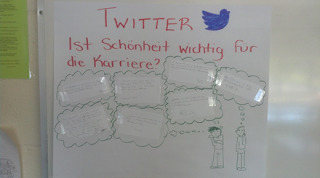 I tried this earlier with my German 4 class.  After we had read and discussed the article Schönheit macht erfolgreich, I had them Tweet their answers to the question "Ist Schönheit wichtig für die Karriere" (we're currently knee-deep in the Schönheit und Ästhetik AP unit).  They wrote their responses on an index card, but they still needed to limit themselves to 140 characters and include a hashtag.  I collected and read them, then put them together on a large sheet of paper and hung it up for other classes to see.  I loved that other levels of German were coming over to read what was said and that German 4 students were reading each other's answers.

After that, I decided I'd try to keep doing this activity with students... but while it only takes 7 index cards to do this with my current German 4 class, it would take a lot more with some of my other classes.  And it seems like a real pain in the butt for students to have to write their response, then count out the characters and make sure it fits.  I decided it'd be easier for me to create a template for them.  Below is the final product:

Now I'm really excited to do this activity again with students!  It doesn't take very long, so it would be a great exit ticket at the end of class.

If you're interested in using the template, it's available for free on my TpT site - just click here!